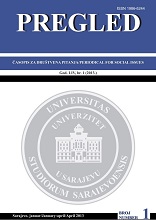 Summary/Abstract: According to previous macroeconomic analyses for 2011, the gradual economic stabilization is being expected in Bosnia and Herzegovina, which will be marked by low economic growth (cca 2 percent), low inflation level (cca 2,5 percent), slightly increasing official rate of unemployment (to 42 percent) and continuous increase of consolidated budget deficit (cca 3,4 percent) of the GDP. All those facts imply that economic growth in Bosnia and Herzegovina in 2011 will be still directed by export sector’s growth, however followed by a slight domestic demand recovery, stabile inflows advances from abroad. We can expect in 2011 prosperity when it comes to foreign investments, primarily because of continuing of infrastructure works on Corridor 5-C, new investments of domestic electro companies into the manufacturing capacities expanding, and also better flows of foreign direct investments. As both local and foreign analysts warn, the main risks for Bosnia and Herzegovina’s future economic growth are delay with forming a domestic government and reform process’ continuation.