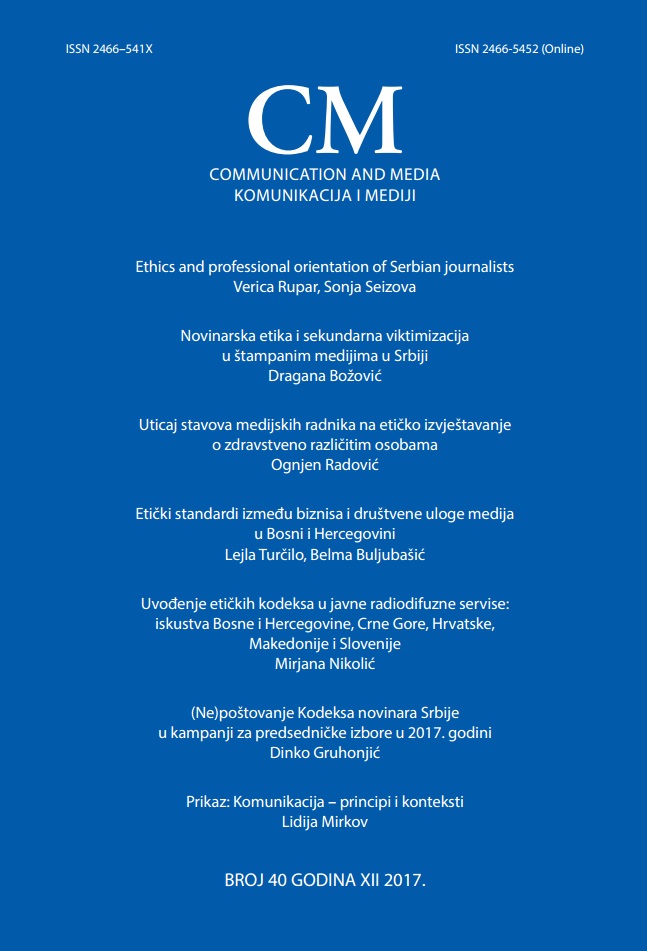 (Ne)poštovanje Kodeksa novinara Srbije u kampanji za predsedničke izbore u 2017. godini
(Dis)Respect of the Serbian Code of Journalists in the Campaign for the Presidential Elections in 2017

Summary/Abstract: The paper presents a comparative analysis of several monitoring reports on the reporting of public media and commercial televisions with a national frequency during the campaign for the presidential elections in Serbia in 2017, with the aim of determining the extent and manner in which the Serbian Code of Journalists was violated. The monitorings, which, rather than being done by the competent state institutions such as the Regulatory Authority for Electronic Media (REM), were largely carried out by civil society organizations, unequivocally demonstrated that, in most cases, reporting was extremely biased in favor of the ruling coalition candidate Aleksandar Vučić. In addition to the fact that they violated the provisions of key media laws and reporting rules during the pre-election campaign, the editors and journalists of televisions also violated the Code of Journalists in various ways. The monitorings, on the one hand, have shown the inadmissible bias of the majority of public and commercial televisions, but, on the other hand, have also shown that there were commercial cable televisions that largely took account of a uniform reporting on presidential candidates. Most of the analyzed televisions did not, however, abide by the preamble of the Code of Journalism, which states that the reason for the existence of media is public interest, and the business, political and private interests of the publisher/media owner should not be an excuse or justification for violating the Code. Most of the monitoring has also shown that the provisions of the Code of Journalism have been violated regarding the truthfulness of reporting, independence from pressures, journalists’ accountability, and journalistic attention.