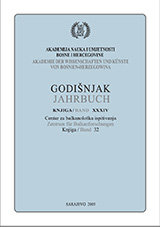 Summary/Abstract: The text will discuss the group of monumental monolithic tomb stones (stećak) characteristic of the area of Dalmatinska zagora (surroundings of Trilj and Imotski) and southwest Bosnia. By decorative elements, simplicity and clarity of composition, the overall stonework orderliness and the monumentality of shape, this g roup of tomb stones represents one of the most beautiful art creations on the tomb stones from the second half of the fifteenth century. However, as many monuments of this kind, this group is nearly devoid of inscriptions and most of the stones will always remain the tomb ornaments of unknown heroes made by a hammer and a chisel of unknown stonemasons. Fortunately, the few of the most beautiful tomb stones from this group has at least some remaining inscriptions. For example, two of the tomb stones (from Cista near Imotski) belong to the couple Vladina and Herko (Jerko) Kustrazić, another one (from Bisko near Trilj) importantly bears the year 1440, while a third (from Lovreč near Imotski) belongs to Vlkoje (Vukoje) Bogdanić. The latter was chiselled by “blacksmith” Jurina (blacksmith is the most common term for stonemasons mentioned on the tomb stones inscriptions). All previously mentioned examples and some others without inscriptions from the graveyards in the surrounding area have very similar style and choice of ornament motifs and stonework orderliness.