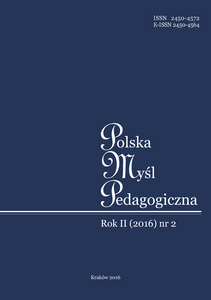 Summary/Abstract: The text presents the origins of the Polish cub scout movement, created within the Polish Scouting Association, and the role played by Aleksander Kamiński (an outstanding educator, scout instructor, author of important historical books on young scouts who were heroes of the 1944 Warsaw Uprising) in the emergence of this movement. Through an analysis of Kamiński’s texts concerning the building of the movement, the author argues that this movement constitutes a significant part of the Polish pedagogical heritage. Not only is this movement important in a historical sense, but also both in terms of the clarity of its objectives and in regards to the original methods and forms used to reach those objectives. The Polish cub scout movement still uses the basic structures, methodological assumptions and organizational solutions developed by Kamiński. The presentation of the history of the movement in this article is limited to the initial period, the appearance of the concept itself and the period of its implementation according to Kamiński’s presuppositions and under his direction, that is, until the years 1924–1958.