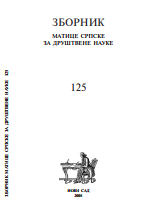 Summary/Abstract: This article represents an overview of different legal cultures. Author compares pluralistic legal systems, concomitant to Eastern societies, with monistic legal systems typical for Western civilizations. This article demonstrates the convergence of different legal traditions as the result of regional and global integration processes. Special attention has been given to Western legal culture. In this respect, the author analyzes fundamental features of European continental law, created by legislature, and of Anglo-American law primarily formed by judiciary. European Union has been in search for a medium solution. The aim is creating a combined legal system which would include both models of law. Such combined legal systems have existed in Scotland (United Kingdom), Quebec (Canada), Louisiana (The United States of America), and South Africa. However, it has not been well known that a similar combined legal system existed in Vojvodina between two world wars. This legal heritage, in the opinion of the author, could serve as a model for creating a new ius comunae europaeum. This model represents the evidence of a successful fusion of legislative (parliamentary) law and common law. In 2005 Matica Srpska launched the research project “Private Law in Vojvodina between Two World Wars" in order to present this legal heritage nationally and internationally. This Collection of Papers displays preliminary results of this research.