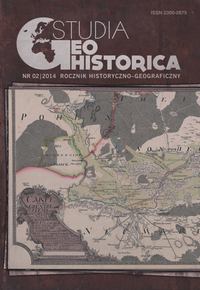 Summary/Abstract: Both in Russia and Belarus traditional paper atlases are still published. Considering large compilations with scholarly ambitions, the majority of cartographic works embrace Russian publications. For the last several decades, after the collapse of the Soviet Union, in the area of historical geography and modern history some historical revaluation took place in the successive countries of the USSR. Naturally, the process has not been completed yet. Its course has been influenced by maintaining in Russia and Belarus at least authoritarian forms of government; though, with democratic elements. Historical atlases from the two countries that neighbor Poland in the East cover new contents, which could be published only after 1991. At the same time, numerous judgments and historical interpretations to be found there are not in compliance with the statements accepted in Poland and reflected in Polish publications on historical geography.