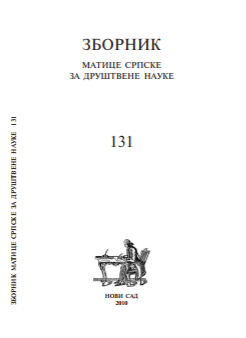 Summary/Abstract: Formulated and mostly employed in linguistics, Zipf's law has been drawing attention of demographers and economists for a number of years relevant to their exploration of regional development or research within urban economy. Particularly intensive application of this law can be seen in analyzing the distribution of cities within a given country regarding the number of inhabitants living in them. The paper shows the application of Zipf's law in an analysis of the distribution of cities in Serbia according to the size of their population. Zipf's regressions have been determined based on the data provided by the 1998 and 2002 censuses, excluding the places populated by less than seven thousand inhabitants. The results arrived at are: for 1991: ln (rank) = 13,79 — 1,025 ln (number of inhabitants), R2 = 0,96; for 2002 ln (rank) = 13,88 — 1,032 ln (number of inhabitants), R2 = 0,96. The paper points out the applicability of Zipf's law.