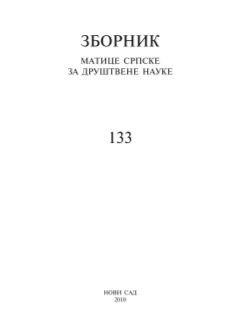 Summary/Abstract: Ljuba Jovanović belongs to the generation that prepared, organized and carried out the liberation and union of the Serbs, Croats and Slovenes into a single state. In 1876, as a grammar school student, together with friends, he organized the student or¬ganization „Branko Radičević”, spreading the spirit of liberty among the youth of Boka Kotorska Bay. When the Second Boka Uprising broke out in Krivosije in 1882, the members of the organization decided to leave the grammar school and join the insurrec¬tionists. After the uprising was put down, he fled to Serbia. In this new and unfamiliar setting, he made his way to the highest honors and titles, thanks exclusively to his own worthiness and abilities. He was among the initiators of the great national and cultural organizations whose activities would reverberate throughout the Slavic South: Sokoli, National Defense, Serbian Literary Cooperative. An initiative was launched in Boka Kotorska for Ljuba Jovanović to head the candidate list for parliament of the National Radical Party in Dalmatia, due to his personal ties with his place of birth. Even though he came to hold some of the leading positions in Serbia and The Kingdom of Serbs, Croats and Slovenes, he remained an honest man, leading the fight against corruption in the National Radical Party.