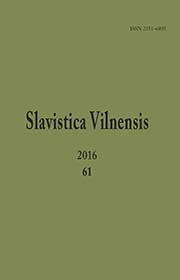 Summary/Abstract: This article is the first publication of the cycles of homilies by the metropolitans of Kiev, based on three manuscripts, which are preserved at the RGADA – the Russian State Archive of Ancient Acts (f. 181 No. 1596; f.181 No. 1594, f.196 inv.1. No. 1620). The homilies were incorporated into the Kormchaja of Ruthenian redaction that was circulating in the Grand Duchy of Lithuania from the middle of the 15th century. As for the basis of the homilies, it lies in the Old Russian texts with instructions to the priests, which are known from the 13th century, as well as the Encyclical Epistle of metropolitan Photius. Of particular significance is a text that is new for the Russian cultural circle, titled Ecclesiastical Order, which clearly articulated the duties of the priest and sets the list of liturgical books required for every church. The language of the homilies seems to be the most valuable because it combines, along with the classical layers of Church Slavonic, elements of the “simple language” — locally spoken (Ruthenian) language that at the time was started to be used in sermons.