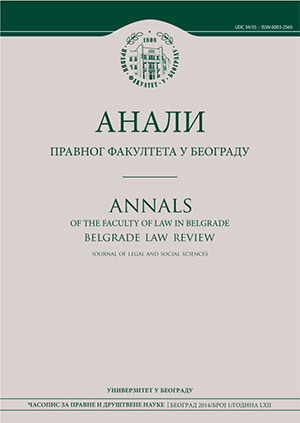 Summary/Abstract: The law cannot squeeze out values. Thus, it comes as an imperative of our reality to set the place for the law in the world of values. The world of values is not apart from our reality. In our reality the world of values is the purpose of everything that exists. Actually, it is about the demand to bring values into our reality. The meaning of values is absolute. The eternity of values immediately points to the absolute order of values, which as such has its „homeland“ in Creator. The issue of finding the place of the law in the world of values is a „pre-legal“ issue. Thereby the world of values is becoming the assumption of the existence and development of the law. Legal norm then becomes the formulation of values. Legal norm is not precious in itself, but only if it expresses fundamental values. Legal norm has to be the logical formulation, that is to say, it has to deliver the contents of value correctly and appropriately. As an expression of the value dimension legal norm obtains the binding power. Keeping in mind the legal norm defined in such a way, nobody can deny its necessity in reality. The law then expresses the contents of value and proposes the model of the ideal behavior. The fact that values have „creating power“ is thus proved to be true.