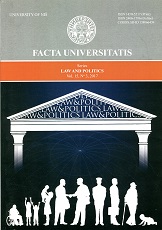 Summary/Abstract: Is it possible for logic of law to squeeze out Christian values, given that the nihilism towards values leads towards the rejection of the major role of the law, which is the protection and realization of values? Is the actual goal of the legal norm, as part of law and logical legal system turned into a command, to establish the behavior which carries out the Christian values it contains? Is the constitution, the law or some other act as the embodiment of the legal norm, really based on certain social and legal values? As opposed to the law, there is a man able to ponder and wonder. Does he live in accordance with the legal norms only out of fear of punishment? Would it be possible for the government to establish the legal system which would be totally based on the fear of sanctions? Can that kind of legal system ever become a stable whole, or might it be destroyed by itself? Is the reason for the failure of the system of the state and law insufficiently centralized government, for example, or the lack of Christian values in their very grounds? The answer to the question posed by St. Thomas Aquinas depends on the answers to the previously posed questions. The question posed by St. Thomas Aquinas is: is the law made only for the evil and the wicked? However, it would be naive to rely on the tendency of correlation between human behavior and his moral principles. The entire human history confirms the result. We are well equipped to find reasons for what we do, but we are not so good when we are to do something for which we see good reasons, for which the reasons are obvious. We often say to our children: “Do as I tell you”, forgetting that they watch and copy exactly what we do. One of the ways to strengthen the bonds between values-attitudes-behavior is to apply signs for encouragement which are supposed to empower the real behavior.