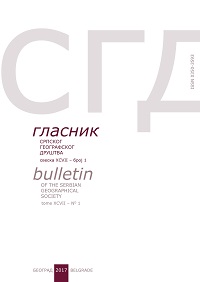 Summary/Abstract: The paper is concerned with identifying changes in the time series of discharge (Q), suspended sediment concentration (SSC) and sediment load (Qs) of the Velika Morva River. The catchment area on farthest hydrological profile Ljubičevski most on Velika Morava River is approximately 35,496 km2. In this profile were carried out daily measurements of flow and concentration of silt in the period from 1967 to 2007. Average perennial transport of suspended sediment is 2.57ˣ106 t (72.4 t/km2 /yr) and ranged from 0.17ˣ106 t (4.8 t/km2 /yr) to 10.02ˣ106 t (282.2 t/km2 /yr). Trends determined for Q, SSC and Qs are statistically obtained using the non-parametric Mann-Kendall test. Results of Mann-Kendall test show that Q has a slight declining trend of annual values which do not show statistical significance. Decline in trend line SSC and Qs is a significant at the level of 0.01. Calculating the standardized regression coefficients, it was found that the relative impact of SSC on sediment load is 3.1 time higher than the impact of discharge. From 1967 to 2007 the average decrease in sediment load at the mouth of the Velika Morava into the Danube was 3.1 t/km2 /yr.