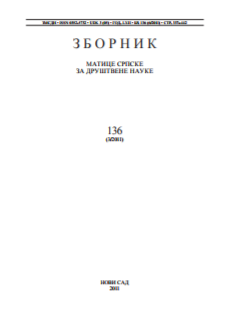 Summary/Abstract: The paper considers Jovanović’s view of the unity of state, law and power. State emerges from the society, by collective act of creation, not by a free individuals’ contract. As the notion of law implies someone guaranteeing law implementation, i.e. coercion, law is inseparable from the state force which guarantees its mandatory feature. Without state, man would not be free because he is free only if there is state to protect him from private violence. Jovanovic emphasizes that state is force, but a well-ordained force, the only alternative of which is a disordered, chaotic force. The paper explains that understanding of the theory of state, law and power unity is essential for understanding specificities of Jovanovic’s political and legal philosophy and his criticism of the theories of natural law and social contract.