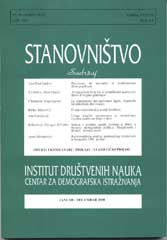 Summary/Abstract: Ever since the 1990’s the number of registered abortions in Serbia has been decreasing from year to year. Are the abortion data of the Public Health Institute complete? In other words, has there been a qualitative shift in the sphere of reproductive behavior of Serbia’s population in the last two decades? This paper deals with the raised question in three ways. First, in an indirect way, by analyzing whether a radical change in birth control since the 1990’s has been possible, having in mind the complexity of the abortion issue in Serbia, as well as the broad social context regarding the last decade of the last century and beginning of this one. The second way deals more directly with the quality of the official data on abortions. Namely, the great decrease in the number of induced abortions, theoretically observed, may be a consequence of the increased level of births, or possibly acceleration in the birth control transition from the use of traditional and inefficient contraception to the usage of modern and efficient methods and means for conception control. For this reason, population fertility trends were analyzed, with a special review on the time period from the 1990’s till present day and the results of the available surveyed researches on the structure of contraception usage in order to determine whether objective assumptions exist for the decrease in the number of induced abortions or not. The third way to reach an answer to the raised question in the title was attempted by estimating the scope of induced abortions. In that sense, relevant literature was consulted and the Westoff method chosen for calculating the rate of total abortions in Serbia (excluding Kosovo and Metohia) in the year 2006. After examining the set task from all three sides, there seemed to be no doubt that the official data on the number of abortions in Serbia are not realistic. The basic reason for incomplete official data on abortions seems to be the fact that in most cases induced abortions performed in private health clinics are not included. Moreover, nurses, namely doctors often experience the filling out of prescribed forms for registration of foetal death as unnecessary, imposed, an additional obligation, without sensing the meaning and not understanding the significance of data as such. The abortion problem in Serbia is serious, complex and demands solving. This assumes the carrying out of many measures, including solving the matter of induced abortions registration. Determination of the realistic number of abortions in a community is very important, because in that way attention is drawn to this health and social problem and enables evaluation of actions to be taken for its alleviation. It remains that the state is to pay due attention to the problem of abortions in Serbia and to put private health clinics in which gynecologists perform abortions under control, as well as to promote the role and significance of statistics among health workers.