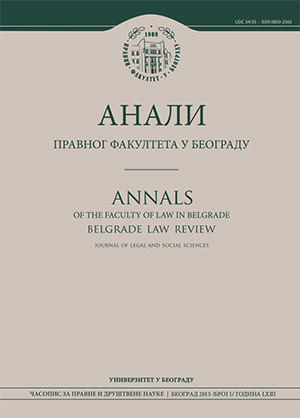 Summary/Abstract: End of the XX century showed that almost all European countries have failed in the suppression of the crime. As a result, they began to seek new legal institutes to establish new mechanisms for efficient resolution of criminal cases. First of all, they stand out plea agreement, which in some countries inevitably follows the system of real jury trial. Among them, France stands out as a country with a long tradition of citizens’ participation in criminal proceedings. Specifically, in this country jury trial takes place more than two hundred years, and was created on the model of English jury. However, almost immediately began the process of separating and distinguishing jury trials in these geographically close states. As it is case today, it is almost impossible to take a legal institute from one state and implement it in the legislation of another state in the same form. So, the English type of jury underwent to the adjustments to the French criminal procedure. That is the best illustrated with the numerous legislative acts adopted in the meantime, through which the jury experienced constant transformation. Since it is one of the oldest jury systems in the world, the author paid the attention to it in this work. The author deals with several units and after the introduction remarks he will explain the position and the role of lay judges in criminal proceedings. Then, he gives a cross-section of their position through the development of this type of trial. After that, he analyzes a jury according to positive French law. Also, throughout the paper provides a comparative analysis of some elements of this type of trial, and on the end he gives a concluding remarks.