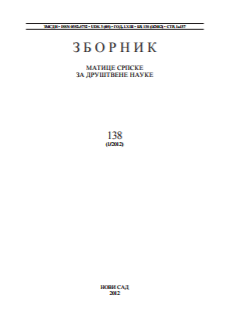 Summary/Abstract: This paper shows the importance of Serbian Orthodox confessional primary schools to maintain continuity in the process of upbringing and education of the Serbs in Romania, as well as their outstanding role in preserving traditions, national and cultural identintety. The central questions of work related to the operation and organization of the Serbian Orthodox confessional elementary schools, primarily with the pedagogical aspect, in terms of their curricula, textbooks, teaching organizations, as well as control of work and school financing. Serbian Orthodox confessional school during the entire period of its existence, accompanied by numerous problems and difficulties. The establishment and development of school followed by poor material conditions for educational work, a lack of qualified personnel, war (no) opportunities and poverty of the majority Serbian population, which is in a complex constellation of post-war socio-political circumstances, led to the abolition of these schools. Although they worked in very difficult conditions, as the only schools where the teaching is performed in the native language, they have drawn a significant mark on the part of achieving continuity in education, preservation of culture and tradition of the Serbian population in Romania.