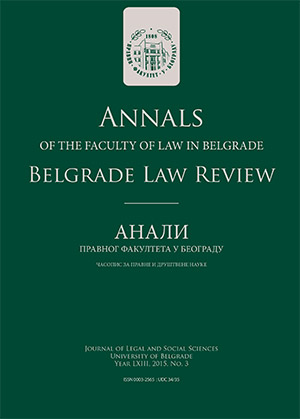 Summary/Abstract: By opting for the approach based on the dichotomy of individual criminal responsibility for the act of genocide and the responsibility of the State in both the Bosnian and Croatian Genocide cases, the International Court of Justice enabled the establishment of a jurisprudential connection with the judgments of the International Criminal Tribunal for the Former Yugoslavia. After outlining the reasons for adopting such an approach, which are classified as both positive and negative, the author offers an extensive analysis of the differences between the ICJ and ICTY, stressing the necessity to take these differences into account when considering the interconnection between the “World Court” and the ICTY as a specialized tribunal. The paper focuses on the need for a balanced and critical approach to the jurisprudence of the ICTY as regards genocide, by differentiating between the Tribunal’s factual and legal findings.The author insists that a substantive criterion, not a formal one, must be applied with a view to the proper assessment of the factual findings of the Tribunal in accordance with the standards of judicial reasoning of the ICJ. As regards the treatment of the ICTY’s legal findings which relate to genocide, it is stressed that their uncritical acceptance would compromise the determination of the relevant rules of the Genocide Convention by the Court. Namely, the law applied by the ICTY as regards the crime of genocide is not equivalent to the relevant law established by the Convention and may be understood as its progressive development rather than its application.