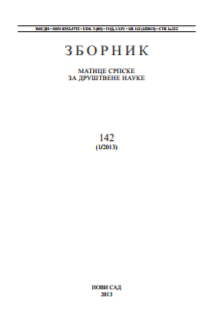 Summary/Abstract: Due to the sparse Roman Catholic population in the Principality of Serbia, Roman Catholics fell under the category of a religious minority. Through different constitutional and other legal provisions Serbian state authorities guaranteed Roman Catholics freedom of religion and also granted the legal status to the Roman Catholic Church in Serbia. Austria and Russia had a substantial influence on the resolution to this issue, and these relations became even more dynamic after the Congress of Berlin. Decades-long process of regulating the exercise of religious freedom for Roman Catholics was overburdened with specific social and political circumstances and the overt inclination of Roman Catholic clergy to proselytism, which was not the case with other religious minorities in Serbia. Although several legal regulations concerning this issue were enacted in the Principality of Serbia, it was only with the Concordat between the Kingdom of Serbia and the Holy See (1914) that the issue was resolved amicably for both agreement parties.