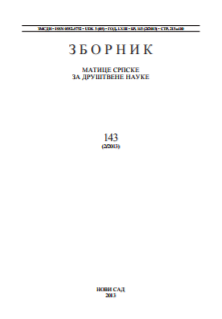 Summary/Abstract: The world has always been an arena where various conflicts, visible and invisible have been happening and unfortunately happen nowadays. The most frequent conflict is (was) the conflict of sovereign subjects (states), while the first decade of the 21st century was mostly marked by many asymmetrical conflicts, between a state (or states) on the one side and not sovereign terrorist subjects on the other side. Every imperilled state, as in any other conflict, has realistic prospects to successfully defend itself and win only when it is adequately informed about the aggressor which, in this particular case, implies terrorist collectivity. Guided by that knowledge, a state endeavours to develop adequate intelligence as an inseparable component of national power, whose success against aggressor, proven in practice, could be optimal, partially successful or weak (inadequate, unsuccessful etc). Accordingly, some aspects of national intelligence power and powerlessness against terrorism are considered in this work.