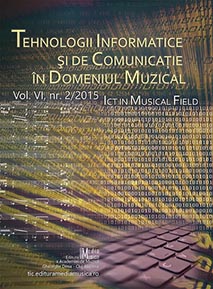 Summary/Abstract: This study starts from Marshall McLuhan's idea according to which media forms are extensions of the human body. Each medium represents a new technology. From press to computer, from organum to electronic music, from trompe l'oeil to conceptual art, the western culture is one with the technological-evolutive mechanism. Together with the new corporality which emerges in visual arts by realist representation, the first polyphonic form, the organum, emerges in music. Both in visual arts and in music the appearance & evolution of the two technologies will make the difference between the western culture versus the others.The last section of this article presents briefly the relation between technology, gesture and concept, as it appears in the three video art works Teofil Stiop presents: Zebra (2013), The Cock (2014) and Funny Stuff (2015).