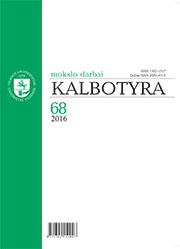 Summary/Abstract: The article provides an analysis of the accentuation of disyllabic nouns in the Southern Aukštaitian (SAuk) dialect spoken in Southern Lithuania (Alytus, Lazdijai, Varėna, Šalčininkai, Druskininkai and Trakai districts). The term pietų aukštaičiai (southern Aukštaitians) was coined by scholars; because of certain phonetic peculiarities of the dialect, the inhabitants of southern Lithuania consider themselves to be dzūkai (Dzūkians). The SAuk has been of special interest to both dialectologists and Baltic language specialists for a long time. The archaic grammatical forms, syntactic constructions, phonetic, accentual and lexical peculiarities that are features of these dialects are intertwined with new phenomena and thus reveal many stages of the development of the dialect of the Southern Aukštaitians, which in turn can be of help in finding answers to some unanswered questions about the development and usage of language. For this reason more attention and research has been devoted to the SAuk dialect and its broader connections with language as a whole. The article analyses the tendencies of the accentuation parallels of disyllabic nouns with ā, ē, a and i̯a1 stems in the SAuk dialect. Drawing on audio and written sources dating from 1952–2015, the spread of the accentuation variants of the words and their forms in the same subdialect, separate subdialects and/or their groups are discussed; the accentuation patterns of disyllabic nouns with the productive ā, ē, a and i̯a stems that are stressed in various ways are described, and the nature of their prevalence in the area of the dialect is established. The study uses quantitative, geolinguistic and comparative methods.