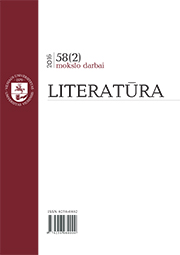 Summary/Abstract: The article discusses the genesis of Realist metaphysician (1931) by Motiejus Miškinis (Motieyus Mishkinis) and analyses the problems in translating Miškinis’ text into Russian language. It is stated that the combination of personal peculiarity and divergence (matters intricit to the self and matters foreign) is inherent to the Lithuanian critic’s submitted interpretation of Dostoevsky’s works. It is argued that the interpretation of Miškinis is essentially influenced by the Russian philosopher’s Nikolai Berdyaev’s book The Worldview of Dostoevsky (1923): the Lithuanian critic acquired ideas that matched his own creative understanding of the great Russian writer from this treatise. Miškinis analyses Dostoyevsky’s works through a (1) religious and (2) historical-political prism. The transformation of Berdyaev’s text by Miškinis is described as an adaptation (transformation and exploitation) for pupils – the purposive recipients of that time. The article discusses issues of translating Miškinis’ text into Russian associated with its characteristic feature – loanwords. The cases of Miškinis’ appropriation of two Berdyaev’s words (экстати-ческий, первородство) are investigated in detail and disseminated. Also examined in the article are Miškinis’ originality in interpretating Dostoyevsky’s quotes (paraphrasing) and their adaptation to the author’s conception. Analysis of translation as an act of ownership (one making the material its own) confirms Hans-Georg Gadamer’s idea that “every translator is an interpreter”.