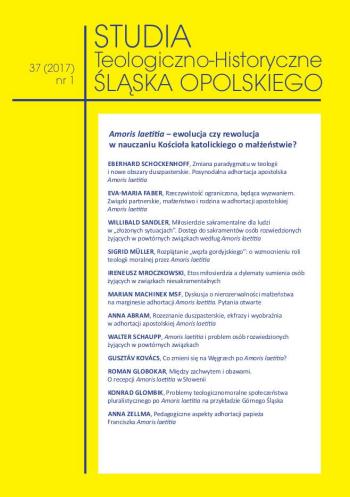 Summary/Abstract: There are two different key interpretations on post-synodal exhortation Amoris laetitia. The first is based on hermeneutics of the continuation of Church teachings on marriage with the new language, and the second one is connected with a change in the moral message of the objective and static ontology to the theology that more fulfils the readings of the Gospel and are closer to a person’s real life. Pope Francis clearly expresses scepticism over the use of general rules for complex pastoral situations and the deductive method, which uses general truths to takes far-reaching proposals for every detailed situation. A change of paradigm in theology consists in the transition from the speculative-deductive method to the inductive method that attributes more value to the experience and the normative adequacy of single normative statements in the life of people. Amoris laetitia avoids the exaggerated idealism of marriage and demands a change of perspective which does not judge but inspires a direction towards growth, but does not substitute conscience, but rather shapes it. Encouraging personal evaluation of conscience is concerned especially with the problem of providing an opportunity to allow divorced people living in second partnerships to participate in taking the sacrament. The only way to answer this question is through the logic of mercy and integration, that orders discernment over complex situations. The crucial assertion of Amoris laetitia is: „it can no longer simply be said that all those in any «irregular» situation are living in a state of mortal sin and are deprived of sanctifying grace” (no 301). The Pope refers to the teachings of St. Thomas Aquinas who emphasizes the circumstances of man’s activities that should be applied in the observance of norms. It is not the ethics of situations, in that the decision about good and evil conduct be left to the freedom of man, but about the resolution of the Neo-Scholastic morality of deeds in favour of the ethics of virtues. The vision of sexuality included in Amoris laetitia is not based on the hamartiology, but on the Thomistic vision of human passions that are itself neither morally bad nor morally good, but becomes the moral through the attitude and action of subject. The justification of the entitlement and the commitment to the pastoral discernment of the complex situations is the logic of mercy.

Was heißt menschenwürdig sterben? What does it mean to die out with dignity? 2015 Zmiana paradygmatu wewnątrz Tradycji. O sposobach odczytywania adhortacji Amoris laetitia Changing the paradigm within Tradition. On how to read the Amoris laetitia exhortation 2017
2020 © CEEOL. ALL Rights Reserved. Privacy Policy | Terms & Conditions of use
ICB - InterConsult Bulgaria ver.1.5.0227