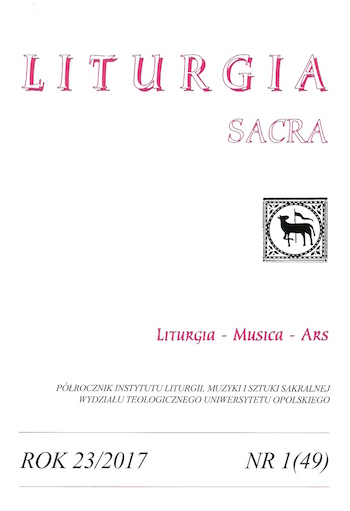 Summary/Abstract: The above article concerns the liturgy of Christians in the perspective of its coming into being, development and celebration in the cultural and religious context of Judaism. It is obvious that the liturgy of Christians does not bear traces of a pure continuation of the Jewish liturgy. However it is deeply rooted in the Old Testament soil of the historic-and-salvific space. Jesus, who initiated the liturgy of the New Testament and is present among us thanks to this liturgy, sanctifies us constantly and joins us to the glory He himself gives the heavenly Father. The liturgy celebrated at the present stage of the history of salvation had not been created by Jesus ex nihilo. Rather, He placed it in the context of a noble ritual tradition of the nation He originated from. The nation which, thanks to God's anointment and covenant, for many centuries had been the type of the Church – the heir of Jesus’ testament concerning the New Testament liturgy. Hence in the liturgy there are cult elements which stem out of the Judaism, however an effective power of salvific action is to be seen in them at the New Testament stage, i.e. In the liturgy set up by Christ, the only Priest of the New Covenant.Therefore the above article underlines Passover and synagogue elements present in the liturgy. What follows is an analysis of postures, gestures and vestments present in the prayer of Christians. Other elements elaborated upon are as follows: track of time, a weekly feast, Passover and Pentecost. Also, readers’ attention is drawn to texts genetically derived from Judaism and greetings and blessings used in the liturgy of the Church. The analysis focuses also on some phrases present in the Christian liturgy borrowed from the Old Testament and some natural elements, which origin and cult application go back to the pre-Christian times.