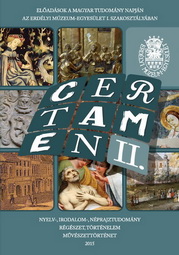 Summary/Abstract: The main works of Hungarian linguistic geography published in the 20th century, especially the Moldavian Csángó Dialect Atlas and The Atlas of the Hungarian Dialects in Transylvania made possible the clarification of some primordial problems about the Hungarians in Moldova. It became obvious that there is a typological correspondence between the archaic group’s dialect and the Transylvanian Plain dialect, since the archaic group of the Hungarians in Moldova originate from the Transylvanian Plain. Meanwhile the largest group can be considered of Szekler provenance. The name csángó was used for denoting the archaic group as a pejorative name and later through generalization it referred to all Hungarians living in Moldova or living in the (eastern) peripheries of the Hungarian speaking area. Using geographical linguistic and sociolinguistic arguments, the article explicates the etymology of the name csángó. It was a pejorative nickname used by the Szekler group to point to the members of the archaic group. The nickname comes from the most largely used verb csinál ‘make, do’ (csán in dialectal form). This kind of pejorative exonym is well-known in the specialized literature. Such names are Moken and Digo, or the name referring to French people in Maori: wiiwii.