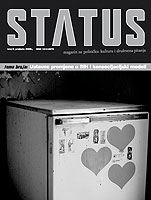 Summary/Abstract: The author claims that the existing Dayton Constitution of the BIH should be radically altered. Both Dayton entities represent transitional constructions brought about by the armed conflict in the BiH, and both should be dismantled in time, with their competences transferred to the state-, regional, and local levels of government. In that sense, the BiH should be ideally organised as a state composed of 4-5 regional units. The author furthermore believes that the process of radical constitutional changes should begin with a transfer of authority from the Federation to the state level, which would result in a self-dismantling of the Federation. As a first step, the Federation would be reduced to 5 cantons that would come into being in the following way: Tuzla Canton would merge with Posavski Canton (1), Zenica-Doboj with Central-Bosnian Canton (2), Hercegovina-Neretva Canton would merge with the West Herzegovina Canton to which the municipalities Tomislavgrad, Kupres and Livno from Canton 10 would join (3), Unsko-Sanski Canton to which the municipalities (from Canton 10) Glamoč, Drvar and Bosansko Grahovo would join (4), and Goražde would remain a single canton (5). As to the RS, the author maintains that the entity should be gradually reduced to a status of one of 8 units of regional self-government, a number that would be further reduced at some future stage. The 8 units would also serve as election units for the BiH House of Representatives. Considering the current negotiating process on constituional amendments, the author maintains that they might run the risk of delivering but cosmetic changes, and also emphasises that there is a demand amongst the public that a public debate concerning the amendments be initiated; negotiations should not be conducted only within the narrow circle of the representatives of the main BiH parties, which include the opposition.

Prikazi Reviews 2004 Dejtonski put Bosne u Evropu Dayton Road of Bosnia Toward Europe 2006 Proces integracije Bosne i Hercegovine u Evropu kao faktor njenog unutrašnjeg ujedinjenja The Process of the Integration of Bosnia and Herzegovina as a Factor of Its Internal Unification 2006 Održiv povratak i njegove implikacije Sustainable Return and its Implications 2009 Bosna i Hercegovina je nacionalna država Bosanaca BOSNIA AND HERZEGOVINA IS A NATIONAL STATE OF BOSNIANS 2010
2023 © CEEOL. ALL Rights Reserved. Privacy Policy | Terms & Conditions of use
ICB - InterConsult Bulgaria core ver.2.0.1219