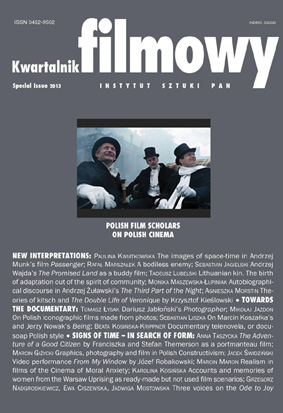 Summary/Abstract: Special English language issue including articles by Polish film scholars on Polish cinema. The first special issue of “Kwartalnik Filmowy” in English was prepared in the framework of the “National Programme for the Development of the Humanities”. We would like to treat this publication as an opportunity to share internationally the noteworthy research tendencies in Polish film studies concerning our national cinema, to indicate interesting phenomena in this cinema, and to present “Kwartalnik Filmowy” as an important, nationally unique field of reflection on film, which encompasses all academic centres of film research in Poland. The first section is devoted to new interpretations of Polish film masterpieces. It is said that every generation writes its own history of the cinema. Thanks to temporal distance, these works can be liberated from their old circumstantial political and cultural contexts, so that new values can be found in them. Today, Polish documentary cinema is sometimes more exploratory than fiction cinema. This is testified by papers presented in section two of the present volume. The last section of the present volume is devoted to experimental tendencies and explorations in search of a new language in film. For us, the electronic issue of “Kwartalnik Filmowy” is also an important experiment and an attempt to reach a wider audience. We count on your feedback and hope for a fruitful dialogue and other forms of cooperation.