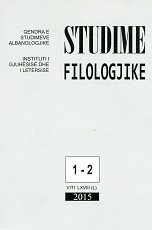 Summary/Abstract: In this essay/article, after introducing briefly the ideas expressed by various linguists on the matter in question, the author throws into discussion two issues: the origine of the patronymic Buzuku, as well as the origine of the name of Gjon’s father (Bdek), giving thus his contribution. He thinks that the two names, Buzuk and Buzuq, are nominal compounds. There is no doubt that the first part of these compounds is the noun buz/ë/(lip/s), but with the meaning ‘brink, border, bank’. It seems that with this meaning, are especially linked the toponyms and micro-toponyms, numerous throughout all the toponomastic nomenclature in our country, which come out since early times in various medieval documents to our days. The second part of Buzuk/Buzuq is the name Ujk (wolf), which appears since early in documents as personal name. It seems, then, that in Buzuk as well as in Buzuq, we have a compounding or a juxtaposition of two nouns, which originally named a place, buzë ‘brink’, where there were wolves, this perhaps in connection to some occurrence, now petrified in the micro-toponym Bazulk (respectively Buzuk). Later the noun must have been used as a patronym; over time it may have passed also to the naming of the village according to the name of the kin holding it. We are then within that circle which E. Çabej calls ‘the system of Albanian anthroponomy’.