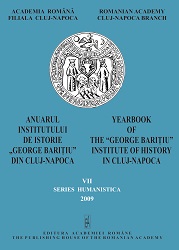 Summary/Abstract: This study is the result of a research which falls into the Sociology of Romanian Sociology. It focuses on the main sociological periodical from the socialist period, namely the journal called “Viitorul social” (“The Social Future”). The quantitative analysis of two of its main columns – “studies and articles” and „scientific life” – provides relevant information about the “individual producers” (authors of studies and articles) and the “collective producers” active in the field of Sociology (institutions which initiated and supported sociological investigations or organized scientific events). The contributors of the journal – sociologists who were publishing since the inter-war period; representatives of different social and humanistic disciplines converted to Sociology; graduates of the newly founded university Department of Sociology– represent, according to the opinion of the author of this study, the most significant Romanian “individual producers” in the field of Sociology within the period of 1965-1989. Most of them came from Bucharest and from other cultural and scientific centers of the country – Cluj, Craiova and Târgu Mureş. Bucharest is better represented than the other centers also regarding the “collective producers” of Sociology. Their “inventory” covers some of the higher education institutions which offered chairs of Sociology or of Social Sciences, the Scientific Institutes of the Academy of Social and Political Sciences, as well as other institutes which developed activities in this domain, like the Centre for Research regarding Youth Problems, which stands out due to the sociological research activity unfolded by its members as well as to the unceasing activity of organizing scientific events in the field.