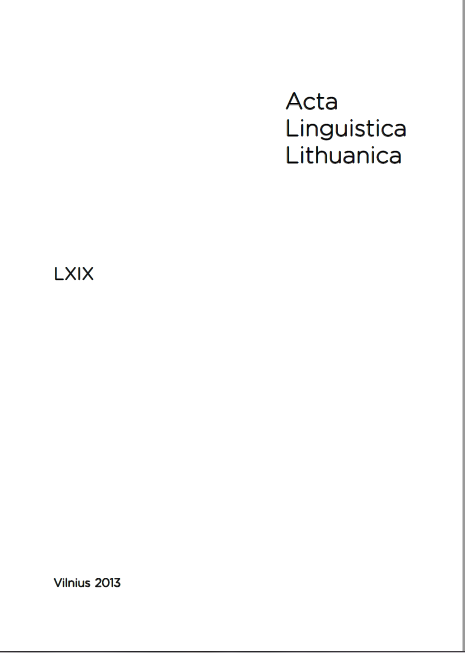 Summary/Abstract: The aim of the article is to connect the model of cognitive metonymy with the model of types of denotative equivalence on word level to check out the explanational potential of the model of cognitive metonymy for describing and explaining the use and occurance of word equivalents in the Lithuanian translations of the fairy tales of the Brothers’ Grimm by Juozas Balčikonis (1938–1939) and Adomas Druktenis (1999–2001). The Brothers’ Grimm fairy tales (GFT ) can be seen in a wide sense as a source of the history of culture and social life in the German speaking countries of the 19th century. Culture-bound words a) refer to a special cultural knowledge, which is in a historical sense not or not completely compatible with the structure of knowledge in our present days, and b) refer to a common cultural knowledge of the community of German speaking countries. The translations of the GFT present ways of handling of German culture-bound words for foreign readers. In this article I want to show, if and how the translators achieved a correct and appropriate understanding of the culture-bound words by choosing equivalents. This allows to show what semantic and cognitive procedures stand behind the use of certain equivalents. By comparing the German original with the two Lithuanian translations it is possible to work out if and how the culture-bound words of the original texts are rendered in the translations, and finally to inductively conclude how far the conceptual metonymy takes part in rendering of culture-bound words in the target texts. Investigating this, there can be established modifications in the theory of conceptual metonymy in the framework of cognitive linguistics.