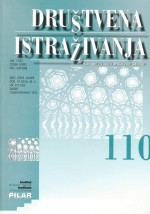 Summary/Abstract: Young people's sexuality is usually analyzed within the sexual risks framework. While acknowledging the importance of such approach, positive aspects of youth sexuality – the issues of gender equality in sexual expression, acceptance of sexual differences, and sexual health – also need to be addressed. The aim of this paper was to describe the dynamics of sexual behavior, knowledge, and attitudes in the population of the University of Zagreb first-year students, in order to contribute to youth oriented sexual and reproductive health policies. The analyses are based on repeated cross-sectional surveys carried out in 1998, 2003, and 2008 on a stratified sample of freshmen. Contrary to a widespread belief, the findings pointed to a substantial stability in sexual behavior in the observed period, both in terms of sexual initiation and lifetime number of sexual partners. However, taking into account recent epidemiological data on the prevalence of sexually transmitted infections among young adults, our results suggest that an opportunity for a systematic improvement of young people's sexual and reproductive health has been lost in the 1998-2008 period.