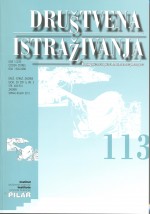 Summary/Abstract: This paper presents the development and validation of a composite measure of barriers to male condom use. The scale construction and validation was carried out using an online sample of individuals, mostly college students, aged 18-30 (n=754). Principal component analysis (PCA) suggested a 5-dimensional structure of the Barriers to Condom Use Scale, consisting of the following components: (1) problems with negotiating condom use and partner’s resistance to condom use; (2) anti-sexual aspects of condom use; (3) normative issues; (4) condom self-efficacy issues and (5) difficulties with purchasing condoms and carrying them around. Only minor differences in the overall structure were found when PCA was carried out separately for female and male participants. Confirmatory factor analysis provided support for the 5-component structure of the new scale. Reliability of the scale (k=27) and its components was acceptable in both male and female subsamples. The scale was characterized by satisfactory construct validity. The new measure of barriers to condom use seems a useful tool for the analysis of inconsistent condom use, particularly among young people. It holds a potential of providing insights instrumental for HIV and STI prevention and intervention programs.