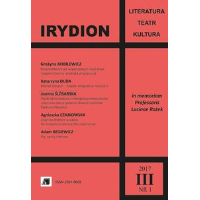 Summary/Abstract: Article deals with the sounds of the body created in the interwar futuristic poetry. The issue was not earlier an aspect of a scientific reflection.The considerations have shown that poets made a body receiving some stimuli concerning sex and emitting sounds, including a somatic discourse into the process of breaking the cultural social standards. Sounds related to sexual activity have been associated with transgressive processes, of which the result is the human being shown as part of nature or a being within the technical products.