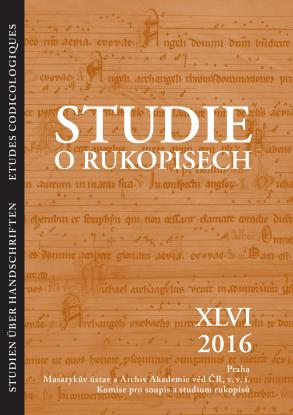 Summary/Abstract: The library of the Counts von Manderscheid-Blankenheim at Blankenheim Castle was established in the 1470s and closed after Napoleon's army invaded the Rhineland in 1794. The last owner of the castle, Augusta von Sternberg-Manderscheid, probably took some of the books to the Sternberg Palace in Prague. After the sale of the Sternberg library in 1830, it was incorporated into the Lobkowicz princes' Prague palace library, with which it was incorporated into the National Library of the Czech Republic fonds in 1928. The present study presents the results of research into the manuscript fonds of the Prague Lobkowicz library, which was based on the discovered Lobkowicz list of purchased Sternberg manuscripts. It presents a total of seven manuscripts of Blankenheim origin from the first half of the 13th century to the first half of the 16th century.