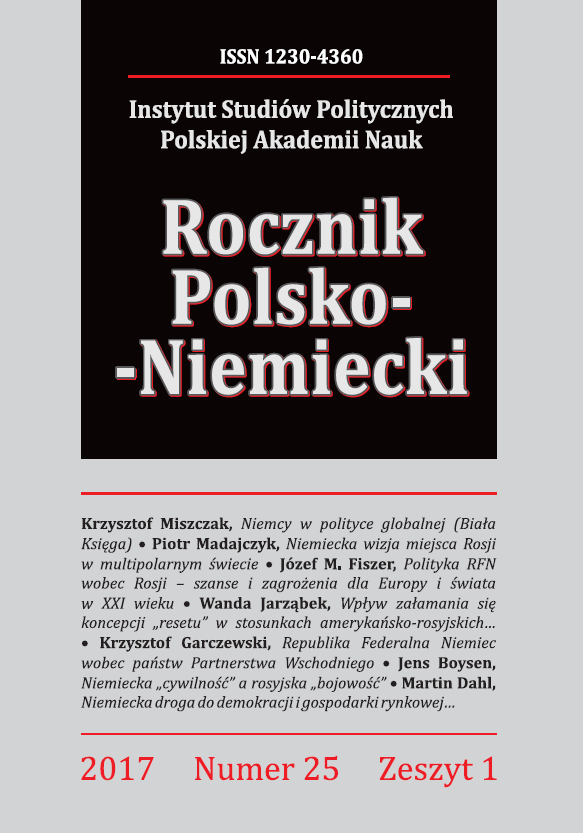 Summary/Abstract: The German experience with democracy and the market economy can be particularly valuable for other European countries for at least two reasons. Firstly, after World War II, the Germans effectively and permanently managed to enter the democratic political system based on the market economy. Initially, the economy was implemented only in the western part of the country and since 1990 all over the country. Secondly, after the collapse of the former Soviet bloc, Central European countries greatly benefited from German political solutions. This means that in favourable conditions, these experiences can be a valuable source of inspiration for other countries, especially those in Eastern Europe.This study is a result of research conducted in 2016 as part of the project ‘Germany and Russia in a multipolar international order. Strategic vision and potential alliances’ with the support of the Foundation for Polish-German Cooperation. It consists of four parts. Part I is an introduction to the issues analysed. Part II shows the genesis and characteristics of the democratic political system of Germany. Part III contains an analysis of the German experience with the implementation of the market economy. In Part IV, the author presents his conclusions of how and to what extent Eastern European countries can use the German experience in reforming their political systems and what conditions they would have to meet.