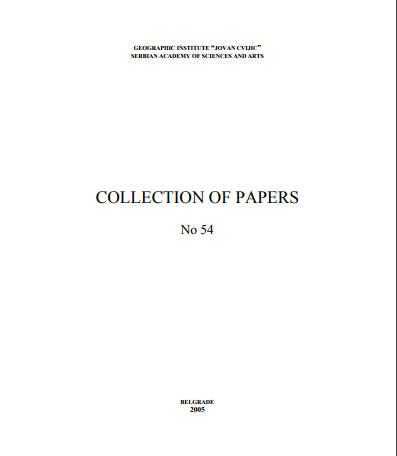 Summary/Abstract: Brief review has been presented in the introduction on the related foreignresearches, of the greater holiday resorts concentration, which are situated on theattractive localities, within the reach of the usual trip-recreational movements of the urban population, from many industrial European centres. It has also been underlined that along the coastal part of our Danube-Basin, following Grocka-Kladovo direction, 49 localities are to be found on the already formed settlements for holiday and recreation. The very same are, in that area, considerably unbalanced territorial distribution, sincethat they are present in an uneven number at the out skirts of the municipal territories that touch the coastal Danube line. They are much further from its coastal zone. The exception is the locality of PetrovoSelo which is located in the north-western territory part of the municipality of Kladovo. Three clearly close holiday resorts (“Dobra Voda”, “Bare” and “Poljana”) have been gathered spatially on relatively low (400-450 m altitude), north-eastern slopes of mountain Miroc. Thus they make the region of Miroc very attractive for reseort and recreation, which is being treated mainly from the aspect of important geographical touristic characheristics. They are consisting of different number recently built and previously inhabited old houses, which have been refurbished (remodelled). They are also distinctive regarding their spatial disposition, considering its particular settlement spreading. Therefore they are mutally differentiated as by their chronological characteristics of building, general spatial physiognomy so in the respect of morphotypological modification in the sub-mountain terrain of mountain Miroc.