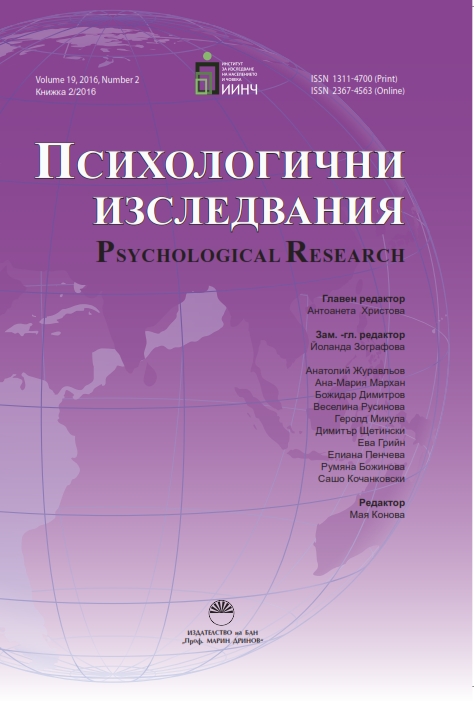 Summary/Abstract: The aim of this study in the first plan has been to gather empirical evidence regarding the stability of functional theory of values in Bulgaria, testing its content and structure and the psychometric properties of its measurement. Also, our objective was to know values orientation of people studied, including their values orientation depending on age, gender and ethnical background. Support for the theoretical model that proposes two widely accepted pan-cultural functions: values guide actions (personal, central, or social goals), and express needs (survival or thriving needs) was obtained in Bulgarian sample (N=458) with confirmatory factor analysis and multidimensional scaling. The results presented that the personalcentral-social distinction was more well-defined that the survivel-thriving distinction, but fit of data to model is good, as the results gave support to the content of the model with six sub-functions: excitement, promotion, existence, suprapersonal, interactive and normative values. The psychometric charactristics of the Basic Values questionnaire (internal consistency and homogeneity of the scales measuring the six basic values) were considered acceptable for research purposes. The results present significant differences invalues depending on the individual characteristics such as gender, age and ethnic bacgraund. Adolescents compared to older estimate higher excitement, promotion, existence and normative values, as there is also a gender effect. Ethnic origin leading to differences in the estimates of excitement and normative values.