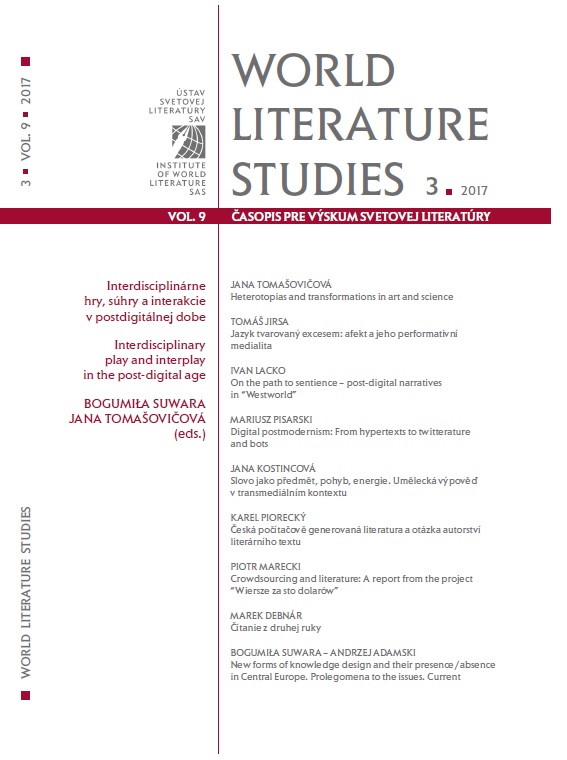 Summary/Abstract: The paper endeavours to analyse the structure and role of narratives in HBO’s 2016 series Westworld from the perspective of their post-digital character and purpose not only for the story, plot and characterization, but also for the cultural and social appeal of the series. The interaction of the clients of Westworld (guests) with the highly developed androids (hosts) is based on the concept of fully immersive experience created using partly pre-programmed and partly improvised narratives written by the corporation running the park. Westworld is a high-end theme park where the visitors can enjoy realistic experiences through guided interaction with the hosts. The park thus becomes a place that, according to Hans Ulrich Gumbrecht, becomes an intersection of the culture of presence and the culture of meaning. The immersive experience is so strong that meaning is secondary, reflecting Erick Felinto’s premise that the human quest for experience, excitement and emotions is a consequence of the diminishing need for information and meaning. In Westworld, it is not only the androids who go on a journey of self-awareness, looking to understand and eliminate who defines them, but also some of the guests for whom the (mostly) predictable virtual world becomes a chance to seek unexpected and new experience – physical pain, or even death.The Baudrillardian hyperreality and the multiplication of simulacra in Westworld reveal how human consciousness (and ultimately perhaps also the consciousness of androids) is affected and determined by the use of devices, artefacts and systems that create their reality.In the fictional world of Westworld, the most defining factor is interaction based on immersion into a narrative experience which, consequently, aids the development and awakening of androids and contributes to the dehumanization of people.