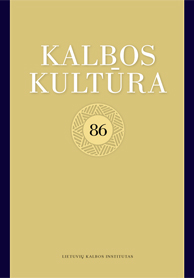 Summary/Abstract: As the Japanese culture is gaining popularity, new loanwords from the Japanese language are paving their way into Lithuanian through the English language, with names of Japanese dishes becoming especially popular.The aim of this article is to provide a more extensive analysis of new loanwords of Japanese cuisine in Lithuania, which have not been previously thoroughly studied, based on synchronic analysis, descriptive and comparative methods and to provide the standardising recommendations for their use. The article analyses ten more popular Japanese cuisine related loanwords (together with their variants) recorded in the electronic domain and the press until April 2013: fugu, kaisekis, kaisekis-rioris, kombuča, misas, seitanas, surimis, šabu šabu, tempura, tofu.The new loanwords have not yet been adapted; their Lithuanian spelling has not been established; therefore, one of the most numerous groups of Japanese loanwords under analysis in the printed media and the Internet language consists of the loanwords of authentic spelling (English transcriptions). A tendency can be observed that the names of loanwords which have not yet been adapted are usually simply distinguished graphically: in bold or italic or using quotation marks. To adapt the loanwords to the Lithuanian spelling and grammar system, it is sought to adapt them morphologically and orthographically; however, it is often the case that if they are adapted orthographically, they are not established morphologically or vice versa: if loanwords are adapted morphologically, they are not adapted orthographically. If attempts are made to adapt words under the morphological system, coincident endings of nouns are maintained, while foreign endings are rejected and replaced with corresponding Lithuanian endings. Most of the borrowed nouns under analysis can be declined by their grammatical structure; however, the declension paradigm of all the nouns under analysis is deficient due to their rather scarce prevalence.Based on analysis data, it is recommended to codify the provided new Japanese loanwords and to add them to the list of equivalents of loanwords approved by the State Commission of the Lithuanian Language. The tendencies of use and standardisation of Japanese loanwords analysed in the article should help to orient oneself after encountering other similar Japanese loanwords.