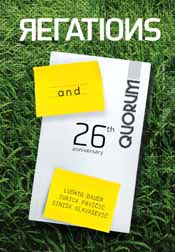 Summary/Abstract: At the time when the Quorum library (1984) and magazine (1985) were founded, three poetic concepts dominated recent Croatian prose: trivial prose, ‘jeans prose’ and the historical novel. The most prevalent concept was that of trivial prose, which described all prose that schematically used various literary devices fit for the tastes of a wide circle of readers (linear narration, provocative plot line, reducing characters to the function of the story, dialogue, the all-knowing narrator, etc.). The most widespread and popular genre was the Croatian version of the detective novel, which was mostly due to exceptional literary production of authors such as Pavao Pavličić and Goran Tribuson. Neven Orhel’s novels about medical life are also interesting. While the three abovementioned authors only indirectly display an awareness of an intentional trivialization of the text, Dubravka Ugre šić begins with such an awareness, but not with the intention of following such a style, but travestying it. For example, she adopts the repository of stylistic devices of the love novel but only to play ironically with the genre, to deconstruct and re-signify it. The writers of the Quorum generation did not refer much to the concept of trivial prose. If some of them did so, they did it very indirectly, mostly using the characteristic devices used in travestying a trivial genre. In fact, some of the authors (for example Edo Bušić and Ljiljana Domić) used certain devices from the period of the Croatian genre of the fantastic, such as the early novels of Pavao Pavličić, Goran Tribuson, Stjepan Čuić, Irfan Horozović, etc.