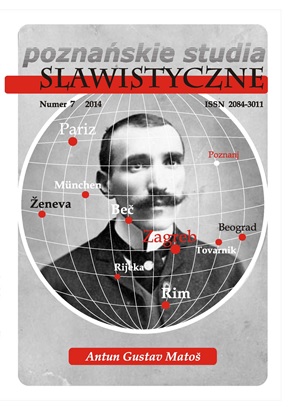 Summary/Abstract: Antun Gustav Matoš is the father of the Croatian literary polemics. By confronting his contemporaries, he shaped a unique style of polemicizing which is characterized by straightforwardness, wit, elegance of speech and artistry. This style is based on various procedures which Matoš used in his polemics as well as on different textual patterns through which he articulated his polemical thought. The paper descibes and exemplifies seven stylistic procedures (portraying in oposition, polemical quote, polemical naming, polemical verb, polemical maxim, word play, polemical point) and eight textual patterns (literary criticism, fictitious dialogue, comical story, polemical poem, aphorism, drama, polemical epistle). The opulence of Matoš’s style produces a polemics which is both carnevalesque and fictional. He brings together what is seemingly incompatible – the polemics which is based on the truth principle and fiction which is essentially indifferent towards that principle.