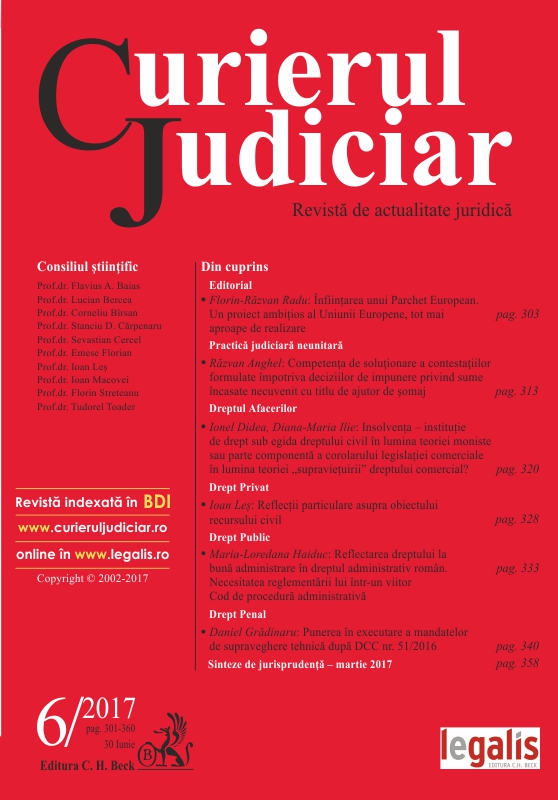 Summary/Abstract: In the attempt to find an answer concerning the new status of the institution of insolvency, in the light of the new Monist system adopted by the Civil Code, we oscillated between tradition and modernity, examining the evolution of this institution from the perspective of the legal norms, but also from that of the doctrinal considerations, having an effect from the personal perspective each time we considered it appropriate, despite the undertaken risk, because the doctrine continues the fight between “tradition” and “modernism'', between dualism and Monism. This “battle” between dualism and monism, between the survival and non-survival of the commercial law, between the outlining of a new commercial law and its disappearance as a whole, continues to exist between big specialists, the arguments being justifying on one side as well as on the other, which is why it is difficult to support either one, all the more so that we can say, indeed, that a law branch that is so important for the commercial law, which has evolved along so many years and which has contributed to the evolution of the modern economy, to the development of the society, generating, at the same time, other laws that include fundamental institutions of the commercial law susceptible to improve the legal mechanisms required by the commercial activity, cannot be ignored and forgotten overnight, even if progress requires sacrifices. This is the reason why very many countries still prefer the dualist concept of the private law, and countries such as Italy, Switzerland, the Netherlands, who opted for the unitary regulation of the private law, kept special regulations on the institutions specific to the commercial activity (debt securities, bankruptcy), which is why the doctrine also considers the fact that within these unitary private law systems, the commercial right continues to exist, through the regulations that can also be found in the Civil Code and are specific to traders, and the special laws of essentially commercial nature. These “commercial” matters –trading companies, insolvency, banks, etc. –benefit from the existence of certain special laws that exceed civil law as it is perceived as general law for the private law, despite the seemingly brutal disappearance of commercial law branch, as a consequence of a unifying trend that is not welcome by part of the doctrine. We oscillate between tradition and modernity, approaching what the doctrine refers to as the “commercialization” of the legal relationships applicable between professionals, determining from our own perspective, through the in-depth analysis of the legal rules and doctrinal considerations as well, whether insolvency has become an institution of law under the aegis of civil law in the light of the Monist theory or has remained a component of the corollary of commercial law in the light of the “survival” theory of the commercial law. The law implementing the new Civil Code keeps the word trader, which is why we could say, in this context, that the new Civil Code has not abandon the word trader for good, and this word can be added to the word “professional”, concretely speaking of “professionals- traders”, professionals benefiting from special laws that have branched out from the commercial law, once a branch of the private law seen from the perspective of the private dualist law system. This is also the reason why the law fights for the survival of the commercial law. Moreover, insolvency was seen, at least until the entry into force of the new Civil Code and of the implementation of the Monist concept, as a special law with an essentially commercial nature. Insolvency, more specifically bankruptcy, is substantiated in the Commercial Codes.Therefore, considering these aspects, we call in question the survival of the commercial law, precisely due to its branching into numerous normative acts that have effectively kept its identity.Insolvency has acquired new valences, and therefore it could not remain stuck between tradition and modernity, being inevitably harmonized with the monist system implemented by the new Civil Code but also driven, in its evolution, by the principles promoted at European Union level. Thus, Law no. 85/2014 on prevention insolvency procedures and on insolvency procedure makes the transition from a law of insolvency specific to traders to a phenomenon accessible to other enterprisers as well, profit-oriented or not, the Insolvency Code obviously taking into account the new concept of the Romanian legislator concerning the unity of the private law. Moreover, we cannot deny the quality of source of law of the civil law, recognizing this incontestable role of the common law, of the civil law as a whole.Nevertheless, the common law gives way to the imperative of the recovery of the debtor in distress, as the insolvency right creates the levers required to achieve the general purpose, by defeating the principle of contractual freedom, the principle of irrevocability, generating positive effects on the entire social and economic circuit and flow, objectives which were developed and established dynamically and unavoidably in national and international economic context, increasingly promoting the idea of cooperation, loyalty, consistency and tolerance, a view that is also reflected in the new approach of the contract by the express regulation of the unpredictability in the new Civil Code. In analysing the doctrinal opinions, we will oscillate between stating and arguing that insolvency turned from an essentially commercial institution, into an institution of the civil law, with the absorption of the Commercial Code by the Civil Code, taking into account the opinions according to which the commercial law lost its autonomy and also its existence, or remaineda component of the corollary of commercial law in the light of the “survival” theory of the commercial law.