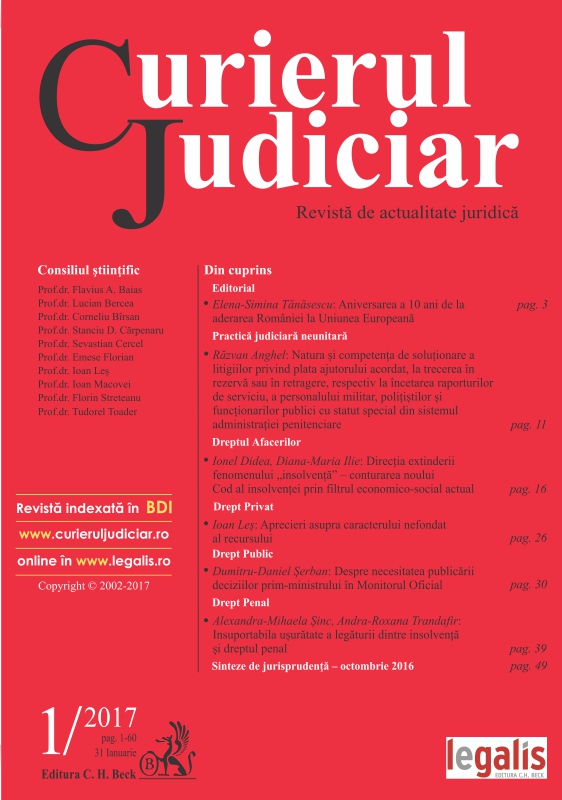 Summary/Abstract: The legislative news, such as Law no. 151/2015 on individuals’ insolvency, which has not passed the practical test yet, deadline for entry into force was extended until August 2017, and the insolvency of the administrative and territorial units respectively, regulated through Government Emergency Ordinance no. 46/2013 and approved by Law no. 35/2016, can be approached by analogy with the Insolvency Code, as well as with the principles and practices used at European Union level and not only at this level, even with unification proposals, with the purpose of concentrating, in a single document, the legislation applicable to insolvency, in order to be able to talk about a proper insolvency code. Undoubtedly, the provisions of the aforementioned regulatory documents can be reflected in the provisions of Law no. 85/2014 on insolvency prevention proceedings and on the insolvency proceedings, and can be approached in an integrative vision, at least in terms of goal and perspective, as the insolvency phenomenon has shown a gradual assertion in the economic and social space and has proved to be, at the same time, a lever for the support and recovery of the economic market, investments and employment. In the current context, insolvency should be viewed as a method of protection provided to the debtor (natural person, legal entity or administrative and territorial unit) in difficulty, with a view to recreate and strengthen a strong, diversified and high-quality industry at national level, by a common acceptance effort, empathy, and interest in creating an attractive economic and social space.