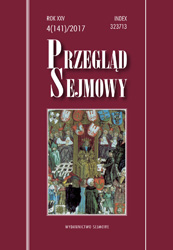 Summary/Abstract: The rokosz (the noble raising) as a constitutional institution was already known during the Third FreeElection in 1587. It was then thought that the rokosz could be proclaimed in both the interregnumand the regnum. The aim of rokosz was to punish or, at least, admonish the King and Senators if theyhad not obeyed state law. It was also empowered to correct the malfunctioning laws. At the beginningof Sigismund III’s reign illegal conventions were often held without the King’s consent. They pavedthe way for Zebrzydowski’s rebellion. The first assembly, held in April 1606 in Stężyca, already hada revolutionary nature, because it was convened during the parliamentary session. The rokosz,covering theoretically all szlachta i.e. all the citizens, ranked above the Sejm, the King, and theSenators. So it was not only a new institution, being an element of the constitutional antisystem, buta revolutionary institution.