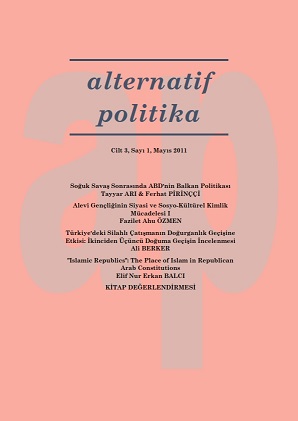 Summary/Abstract: With its different definitions, its pluralist structure and its contribution to the political, social and cultural space of Turkey, besides constituting an important factor; Alevism; is a often debated concept and a mobilization tool nowadays. Since the Ottoman period Alevism has a struggle of identity. Their marginalization in the Ottoman Empire as well as in the later periods of the Republic due to the characteristics of their belief system, their definition as the „other‟ by the opposition forces have caused great difficulties for Alevis. Because of the oppression they have experienced, they could not sufficiently express themselves and could not attain a cultural autonomy. However, with the transition to the multi-party system and migration flows from the country-sides to the cities, the situation has began to change and especially with the effect of the political activities of the mid-1960‟s, the Alevi community, especially the young generation has began to take its places in the society. Alevis that formed an important fraction of the 68 generation have adopted leftist orientations that formed the basis of their identity formation. This process has continued throughout the 1970‟s. But events between 1978-80 have once more deeply affected the Alevis and they once more retired into themselves. Besides observing the identity formation of the Alevi youth between 1968-80, this article also highlights the importance of their contributions to the political development and to the direction of this development in these periods.