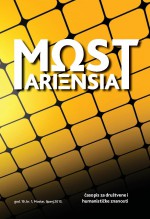 Summary/Abstract: The paper analyzes the demographic characteristics of the parish of Opuzen in the period from 1870 to 1880. The research is based on the analysis of data from the Croatian State Archives in Zagreb (registers of baptisms, marriages and deaths from 1870 to 1880). The average annual birth rate in this period was 41.03 ‰, and the average mortality rate was 38.31 ‰, indicating that the population of the parish of Opuzen in the mentioned period, according to the above findings, was still in the pre-transition phase. The resultant of so high birth and mortality rates is very low natural population growth of 2.72 ‰. The rhythm of conception rate was more emphasized during the spring than the autumn season. In the total number of births, there was a high percentage of natural children born in the parish, around 4.8%. The high rate of child mortality was also recorded, which was an indicator that the population of the parish did not enter demographic transition at that time. Most of the weddings were recorded during the winter season, the greatest number of them in February, and then in January. During the analyzed decade there was only one cousin marriage, which confirms the orderly observance of religious and customary norms of the parish.