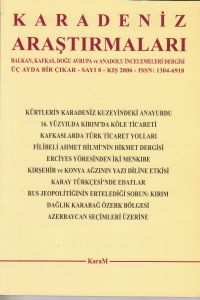 Summary/Abstract: The Ottomans completely controlled the Black Sea trade including slave trade after the conquest of Constantinople. Up to the 16th century, the Ottoman Empire met its slave needs from the war captives and from frontier raids in the Balkans. However, the increasing military resistance in Europe against the Ottomans forced them to find out other ways to meet the demand for slave. Therefore, the Crimean Khanate took over this opportunity and began to export slaves to the Ottoman Empire. It was after this that the Crimean Tatars began to organise raids into Russia, Poland and Caucasus for slaves, and they filled the Ottoman and Egyptian slave markets.