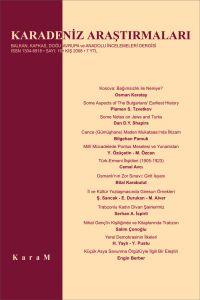 Summary/Abstract: This paper surveys briefly some crucial point of meeting between the Jews and various Turkic groupings throughout the history, beginning from those on the Silk Road to the Khazars, Seljuks and Khwârazmians. A special place is given here to the conversion to Judaism of the ruling strata of the Khazars, the most long-living Empire of the Eurasian steppe. Aspiring to enter the Mediterranean cultural circle and feeling sandwiched between Byzantium and the Khalifate, the Khazars chose to be the third force and the earliest religion; however, their conversion to Judaism was not an aberration, but rather should bee seen in the same context as the conversions of the Eastern Turks to Nestorian Christianity, Manichaeism and Buddhism. This author argues that while the Khazar domination in Eastern Europe was a continuation of that of the Western Türkic Qağanate, their conversion to Judaism could have taken place only in the cultural context of the Su'ûbite movement and 'Abbâsid mentality. Turkic dynasties, armies and tribal confederations dominated Eurasia and the Middle East for hundreds of years and they were the forces which shaped these regions and Islam as they are today.