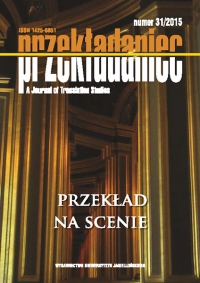 Summary/Abstract: The paper offers a review of Tomasz Swoboda’s 2014 book Powtórzenie i różnica [Repetition and difference] – a collection of nine essays in translation criticism, previously published in Literatura na Świecie monthly, in which the author discusses Polish translations of 20th-century francophone and hispanophone poetry, fiction, and philosophical writing. Swoboda’s collection is one of very few book-length pieces of translation criticism published in Poland, and hence it constitutes an important voice in this rather neglected and underdeveloped area. Apart from offering insightful analyses and compelling interpretations of the particular texts, original and translated, the book also has a meta-level merit: by presenting a particular, highly consistent way of criticizing translated texts, it invites reflection on how (else) translation criticism is, could, and should be practiced. With a focus on the opening piece entitled Mroczny Blanchot [Blanchot the Obscure], and brief references to other essays, the review discusses Swoboda’s critical method and rhetoric. What is found to be especially praiseworthy about the former is the author’s ability to maneuver between the micro- and macro level, combining meticulous linguistic observations with the broader context of literary traditions, canon formation, translation reception etc. One feature of Swoboda’s translation criticism that calls for a polemical stance is his distrust of or disregard for translation theory, openly voiced by the translator-cum-critic also on different occasions, and indeed characteristic of many contributors to Literatura na Świecie. It is argued that this attitude stems from the fact that Swoboda and his colleagues equal theory with academic jargon, rather than with thinking about or problematizing translation. On the other hand, in avoiding theoretical discussions, Swoboda makes his book appeal to readers otherwise concerned with “literature as such” rather than with translation studies, thus making them aware of the complexity of the phenomenon of translation. All in all, one can say without a shadow of a doubt Swoboda’s book is a highly inspiring and much-needed publication.