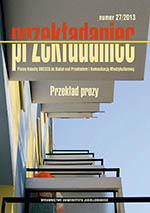 Summary/Abstract: This article presents a recent English translation of Bruno Schulz’s stories, which is almost entirely unknown within Polish academia. John Curran Davis has published his version on his website schulzian.net without the permission of the copyright holder. The infringement of copyright has doomed Davis’s translation to non-existence in the offi cial circulation system. Referring to Theo Hermans’s concept of equivalence, I argue that the lack of institutional sanctioning may lead to the questioning of the ontological status of Davis’s text. Davis’s version is not challenged on intratextual grounds, but rather due to contextual factors: laws regulating the circulation of texts and their place in culture. This fact is best illustrated by comparing the status of Davis’s illegal translation with that of the yet unpublished version by prof. Madeline Levine, backed up by her position, institutional patronage and the support of academic circles. Although Davis’s independent translation, not subject to the publisher’s control, can be treated as a wayward threat to the “truth” of Schulz’s original, one should also consider the role of his initiative in the promotion of the Polish writer’s output among readers who would not reach for Celina Wieniewska’s canonical translation or Levine’s new version. Available for free on the Internet, Davis’s texts colonise on behalf of Schulz areas of popular culture inaccessible to the offi cial translations. Regardless of ethical evaluations, Davis’s enterprise certainly constitutes an interesting cultural phenomenon and as such deserves the attention of both translation scholars and academics researching the foreign reception of Schulz’s oeuvre.